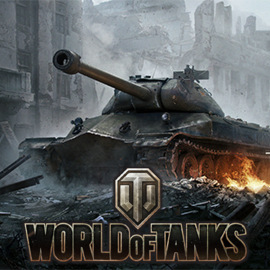 Even those who do not have a computer have heard of World of Tanks. For more than 10 years, this simulator of tank battles from the Belarusian studio Wargaming.net has been one of the most popular games in the world. All thanks to the original theme, easy training, well thought-out balance, tactical diversity of battles and sparing system requirements - while "Tanks" still amaze by its beauty and technology. Let's find out what makes this work touch the heart of gamers of different cultures and ages.

The style of World of Tanks immediately reminds us of World War II: you can see the tanks, uniforms, and decorations familiar from war movies. But it's not that simple. Although models of vehicles copied from real examples, and to create maps the developers visited the places of military glory, no reference to any specific events here. The main focus is fascination, not historical accuracy. After all, who won in 1945, everyone already knows, but the outcome of the skirmish between Soviet KV-2 and T-34 - is already curious. Therefore, in the same squad can be found as domestic machines, and German, whichever way you like. And the battles, unlike the real ones, are fought exclusively with armored vehicles - without the support of infantry. 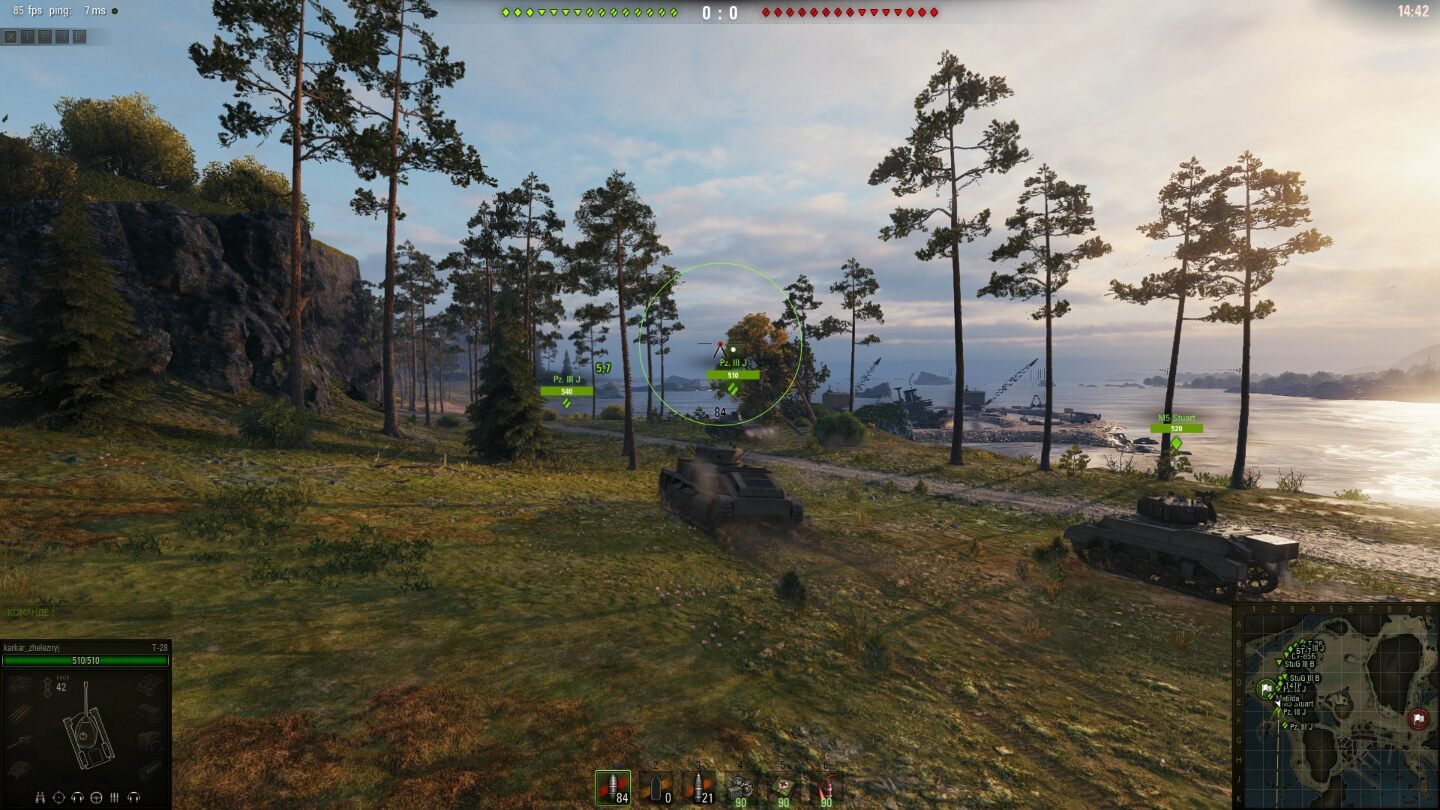 The main and most fascinating part of "Tanks" is, of course, combat. To understand the basics, including shooting and steering, you must take a short training course, and then try your hand against live opponents. Before the battle, participants choose their armored vehicles and divided into two teams of 15 people. The game automatically equalizes the chances - it does not bump heads with the beginner and the veteran. So success depends not on the nominal level, but on the coherence of actions, maneuvers, using the advantages of their own equipment and disadvantages of the enemy.

Someone, taking advantage of the small size and speed, detects enemy forces and "lights up" the targets for comrades. Other tankers move around - under the cover of buildings and trees. Others can charge the enemy directly, outmaneuvering him in a duel due to the increased turret rotation speed and faster reload. Usually the clash lasts no more than 10 minutes - quite enough time for one side to defeat the other.

The gamer spends the lulls between feats of arms in the hangar. Here you can repair the damaged vehicle or spend the loot on a new one, and at the same time learn something interesting about it. It also does not hurt to buy consumables - shells, first-aid kit, repair kit, or, for example, a pack for the crew, with which the tank will temporarily become faster, and the recharge rate increases. There is even a development tree, as if in a real strategy. And each country here has its own branch - earning experience and in-game currency, you open more powerful equipment.

Being original in style and theme, World of Tanks offers the whole bouquet of modern MMO - with different maps and modes, daily and global challenges, systematic resource earning and leveling up, rewards for personal and team achievements. Only in contrast to the well-familiar war of orcs and elves, the first place here is not the level of the hero and his equipment, and TTH machines and the wit of the player. Besides, you will not get the same historical information about any fairy-tale artifact as about real tanks of the middle of the XX century.

What models of equipment are represented here?

World of Tanks has hundreds of vehicles produced by 11 countries: the Soviet Union, Germany, the United States, China, France, Great Britain, Japan, Czechoslovakia, Sweden, Italy and Poland. In addition, they are all divided into five classes. Light tanks, having weak armor and not the most formidable guns, are extremely agile - they are easier to disguise and use for reconnaissance. Heavy, on the contrary, is difficult to hide in the bushes, but due to the protection and cannons it is ideal to break through enemy's defenses. Medium is the golden mean: equally good at maneuvering and in close combat. There are two other types - anti-tank self-propelled vehicles and SAU, that is artillery. The task of the former is to pierce the armor with a direct line of fire, and for the latter there is a whole game in the game: they fire across the area, observing the map from a bird's-eye view. 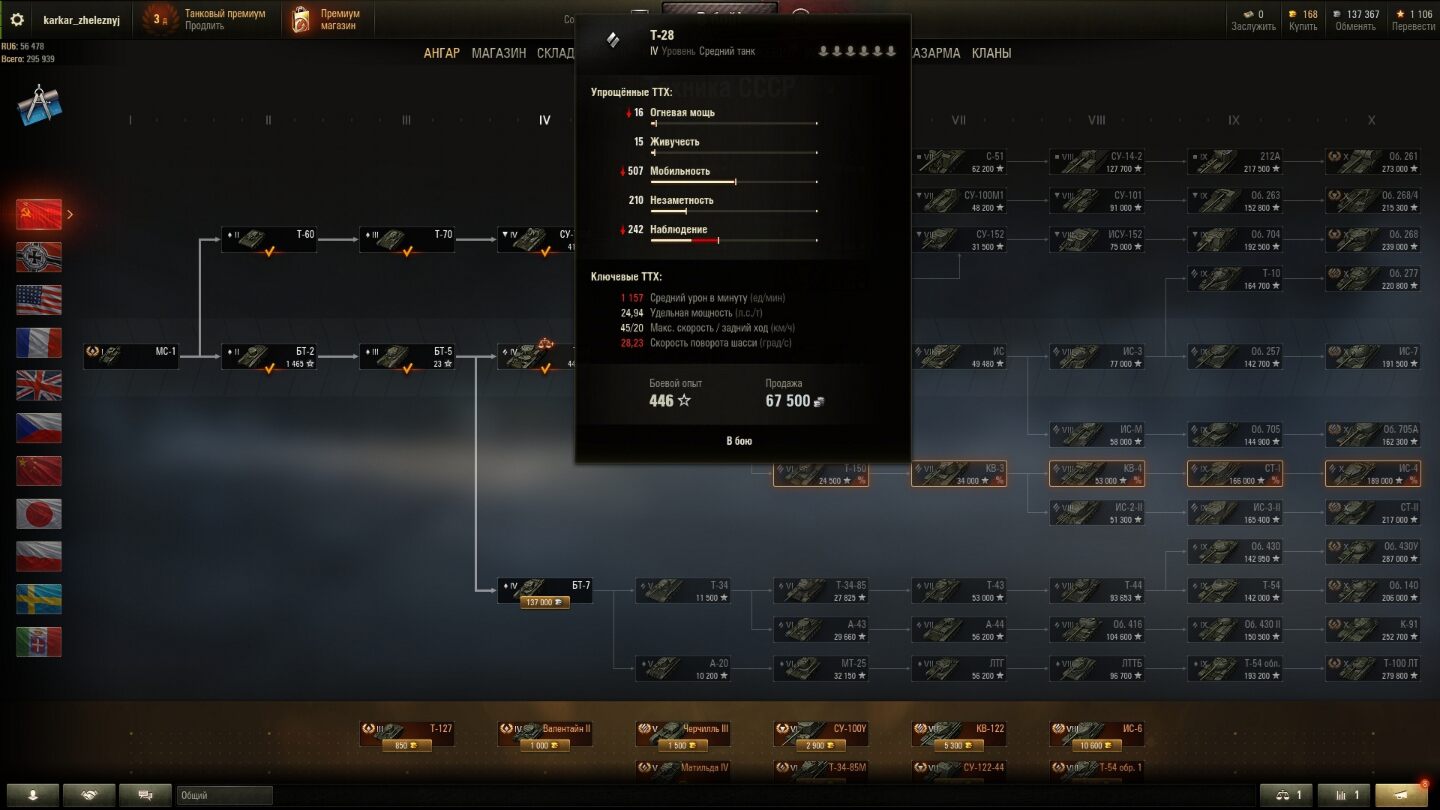 The full set of vehicles is not available immediately. After registration, users get entry-level light tanks for free, then gradually open other machines. All of them are recreated according to real samples. And although the characteristics of some changed for the sake of balance, nevertheless the main features are in place - so, the German Maus has an exceptional margin of safety, and the French AMX 50 B, despite the weight of over 60 tons, flutters like a butterfly and stings like a bee.

The game also has a great variety of models in terms of rarity and date of manufacture. There are prewar, such as the Soviet T-28, and postwar - like the Soviet same T-10, developed in 1949. You can take control of rarities that existed only on paper. These include, for example, a modification of the legendary T-34 with a 100 mm gun. In reality, this machine was rejected because of too strong recoil, but in the virtual world it is available - you only need to unlock it in the technology tree. 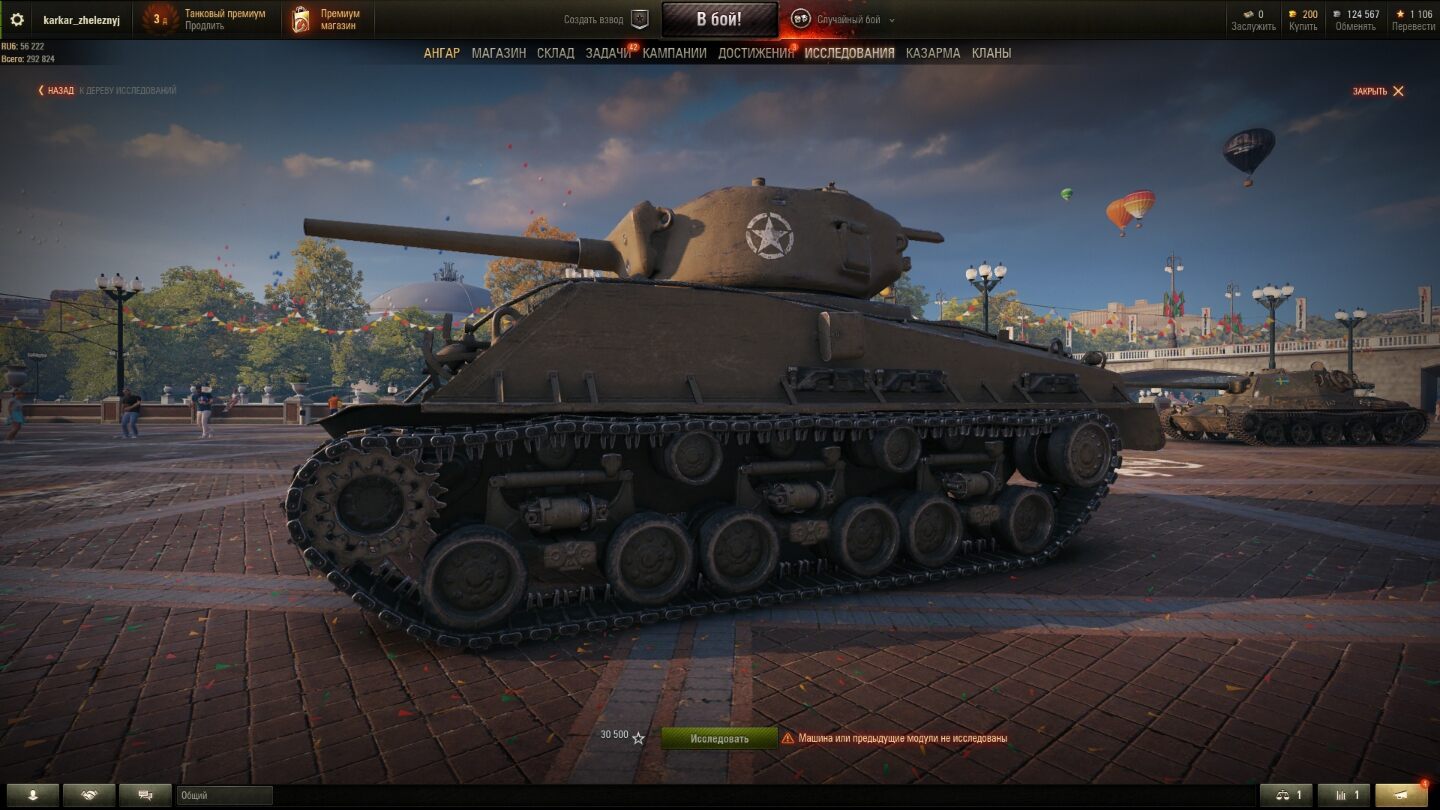 Tanks familiar from war movies are not forgotten either - the M4A3E8 Sherman from "Fury" with Brad Pitt. In general, World of Tanks allows you to discover not only the variant that fits the style of the game, but also some exotics that you read about in books or watched movies.

About World of Tanks maps and modes

For combat, the game offers more than 50 maps, mostly one kilometer by one kilometer in size. Although they vary in style, weather conditions, and terrain, all have shelters, workarounds, and flat areas for firefights. Locations are inspired by real landscapes, cities and historical events - you can hammer on the "Siegfried Line" and Prohorovka, fight in the streets of Minsk, Paris and Kharkov, in the forests of Karelia and the mountain valley of Lasville. There is even an Asian battlefield near the famous Chinese Wall. Not all maps are available immediately - each has a threshold of entry by level of tanks. And some are only open in certain modes. 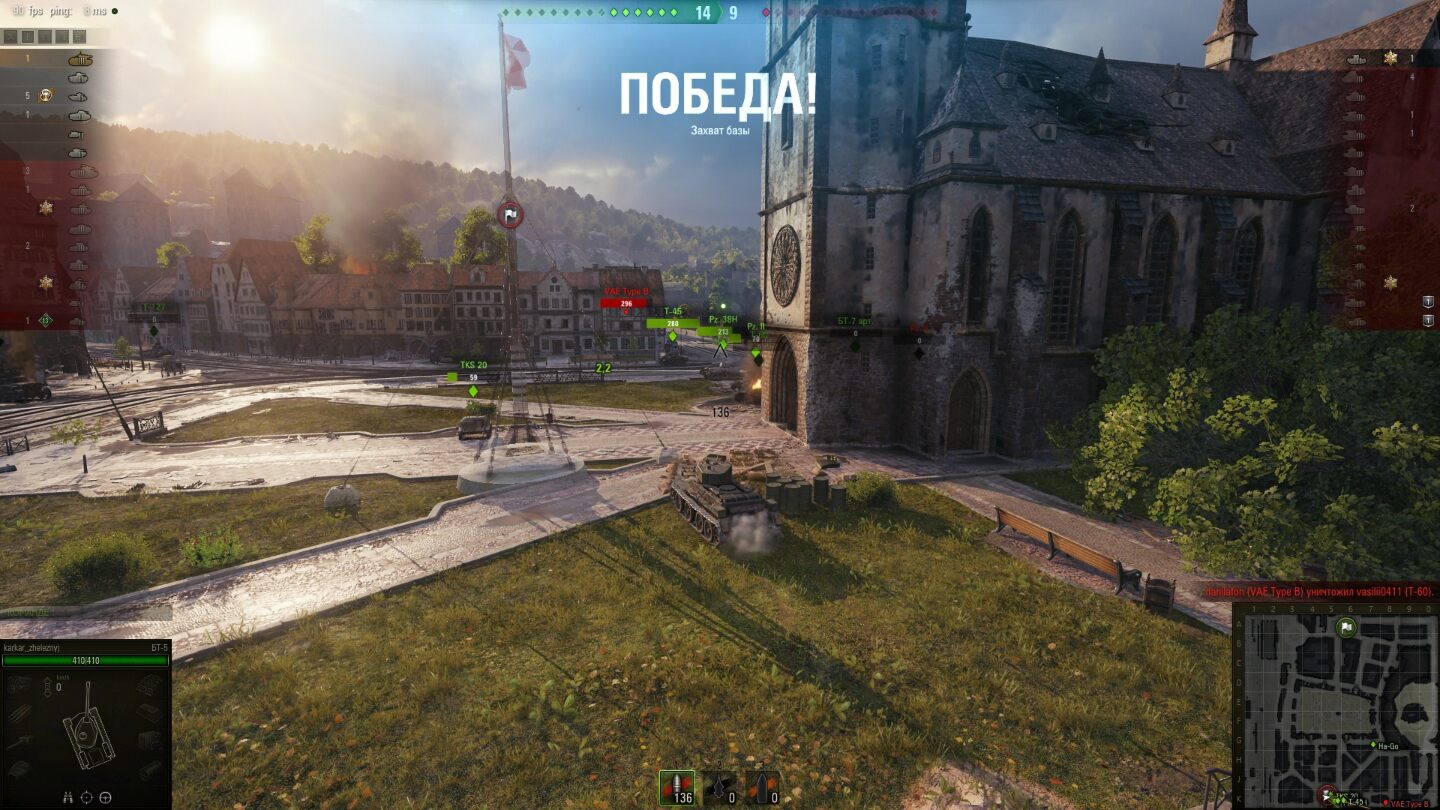 The mentioned modes in World of Tanks are also enough. The game immediately introduces the newcomer to the training battle, where the role of the enemies are bots under the control of artificial intelligence. Rival with live opponents can be in "Standard Battle", "Assault" and "Counter-Strike". To win in the first need to destroy vehicles or capture the enemy's base, in "Assault" one team defends the specified point, while the second is trying to repulse it, and "Encounter Battle" two groups are fighting for the same place in the middle of the map. If no one reaches the target in 10-15 minutes, a tie is declared.

The developers did not ignore and PvE - the battles of people against computer opponents. In addition to training for 1-2 level tanks, this format has recently become available as part of the "Road to Berlin". There are also modes held in seasons ("Front Line", "Rank Battles") and for advanced users - we are talking about the "General Battle", which is attended by 60 tanks at the 10th level. Clan members (see more about them below) have access to "Fortifications": they can build and develop a command headquarters, making sorties from there. That is, the strategic segment is interspersed here with the usual battles on the map. The advantage of this property is that all members of the clan that owns a HQ get additional bonuses for victories.

In "Tanks", as in any other MMO, there is a system of progression. Getting experience and credits for battles, you can simultaneously progress in two ways - to develop vehicles and crews. The first part - opening more and more steep tanks in the research branch of the selected country, as well as the purchase of modules for them. For example, installing stronger tracks, upgrading the engine, transmission, barrel or replacing the optics in the sight. As a result, the behavior of the vehicle in combat changes slightly, but it is often enough to show the enemy what he wants to see. The resource used for such improvements - experience points. It is logical: to pump the tank you just need to play with it in online matches. 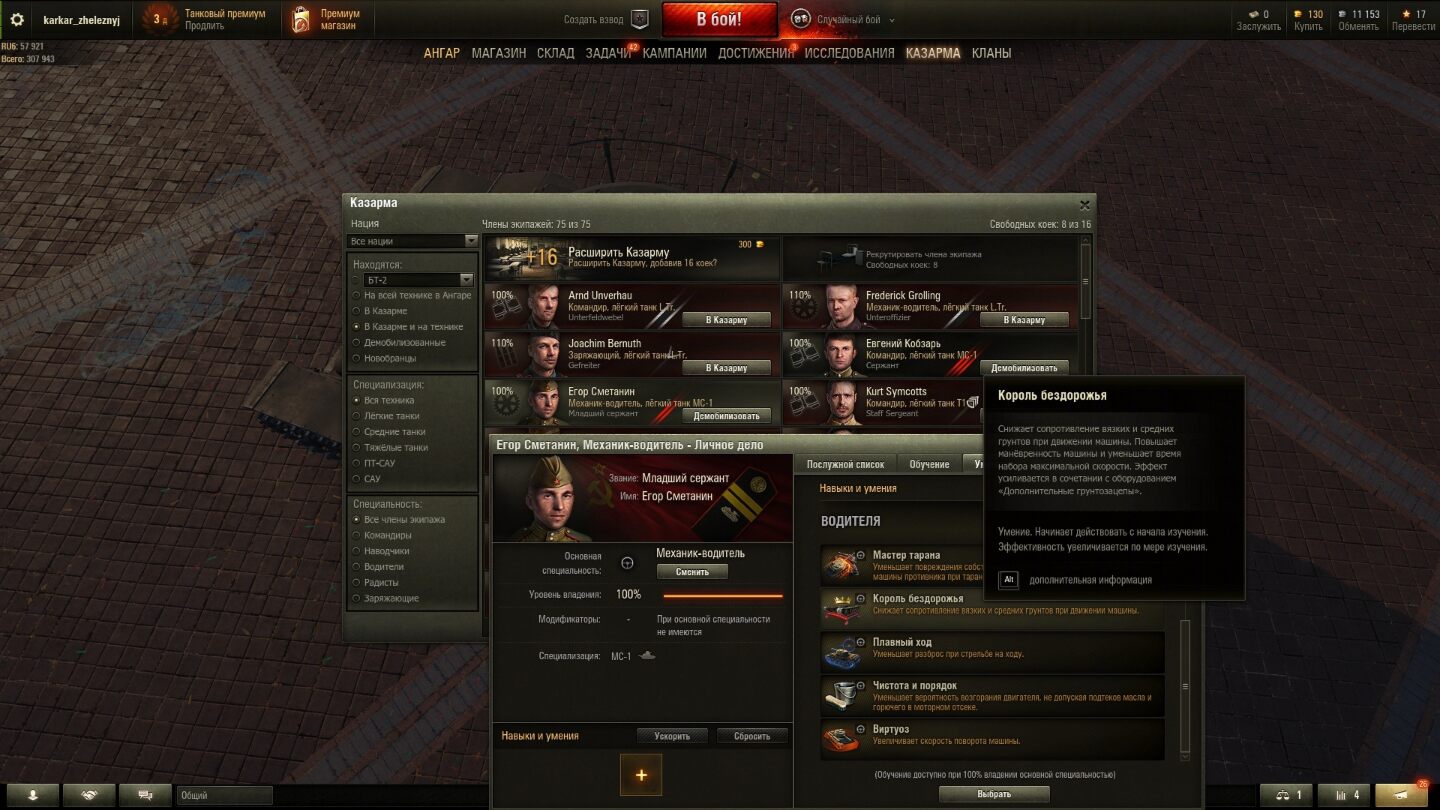 The second side of development is the crews. They are hired in the "Barracks" and usually consist of the commander, gunner, radio operator, driver mechanic and loader. But in the end, it all depends on the design of the machine: there are options for 2-characters, 4 and 6 - all of them accumulate their own experience and even receive combat awards. And with experience grows their effectiveness. For example, a pumped-up loader will be - here it's simple - faster to load the gun. On the other hand, he can be wounded - and then the reload speed will drop. The same goes for any specialist. A special role in crew development is played by skills such as the Sixth Sense, which tells you that you have been spotted by the enemy even if you can't see him yet.

Separately, we should talk about the clans. These are associations of players, giving members different bonuses - primarily additional experience and in-game currency. To create a clan to pay 1 million silver (considering that the usual matches bring 40-50 thousand), so gamers prefer to join the existing clans for the sake of pumping. Boost your progress by buying a premium account, as well as boosters (items that increase the amount of experience received in battle) and especially powerful tanks for real money. Yes, it's not done without donation, thanks to which you can achieve your goals faster. But the game puts skill and experience in the first place, and all its features are available for free - the ruble fee does not make anyone a god of war.

World of Tanks is a unique online action game with a rich selection of armored vehicles, various modes, challenges, and mechanics, from tank control simulation to strategy. You can apply tactical ingenuity and shine a high level of teamwork, and a huge community around the world will always provide a comrade for the match, and useful information. In addition, the game is beautifully decorated: the shots and explosions sway the grass, machines in motion leave traces on the ground and break buildings, the atmosphere of battles complement the orchestral soundtrack. That's why "Tanks" will be appreciated not only by fans of military history, but also by those who want to spend an interesting evening or two, as well as anyone looking for variety in a fantasy MMO about elves and gnomes.