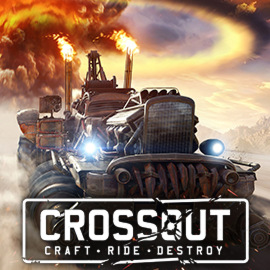 Crossout is certainly one of the most popular Russian MMOs today. And this popularity is largely due to the theme itself. What Russian doesn't love a fast ride? Especially in their own designed buggies (and not only) on the dusty post-apocalyptic roads... So this project should appeal to those who are fans of Mad Max, remember the old and once sensational Ex Machina game and adores all this romance. But, of course, it's not just for advanced lovers of the subject. If you just like to drive a car, and even shoot or ram the opponents on the fly, and then sit in the garage and tune up your "iron horse" - passing by Crossout you go (rather, passing) is not recommended. We tell you more about the game.

About the history of the world and factions

The catastrophe that occurred in the world of the game, in fact, and gave it its name. Crossout - that's how journalists dubbed the source of the epidemic that swept the planet in 2027. The topic is understandably relevant today, but this "Crossout" is much scarier than the coronavirus - those who did not die from it in the first day, in many ways envied the dead: they began to have hallucinations and headaches, some victims went crazy and committed suicide.

It was impossible to figure out what it was and what the nature of the disease was. Who cares anyway - survivors began to irreversibly change, including externally, especially evident in their eyes, which either glowed or, conversely, turned into black holes. Naturally, they had to be covered with clothes and dark glasses. And some had to hide their faces beneath masks-they were especially dangerous because, according to rumor, there was nothing human left in them.

The events of the game start 20 years after the disaster. And the layout is predictable - there are those who want to restore the old world, there are raiders, bandits and marauders. And just mentioned people (or not people?) in masks. 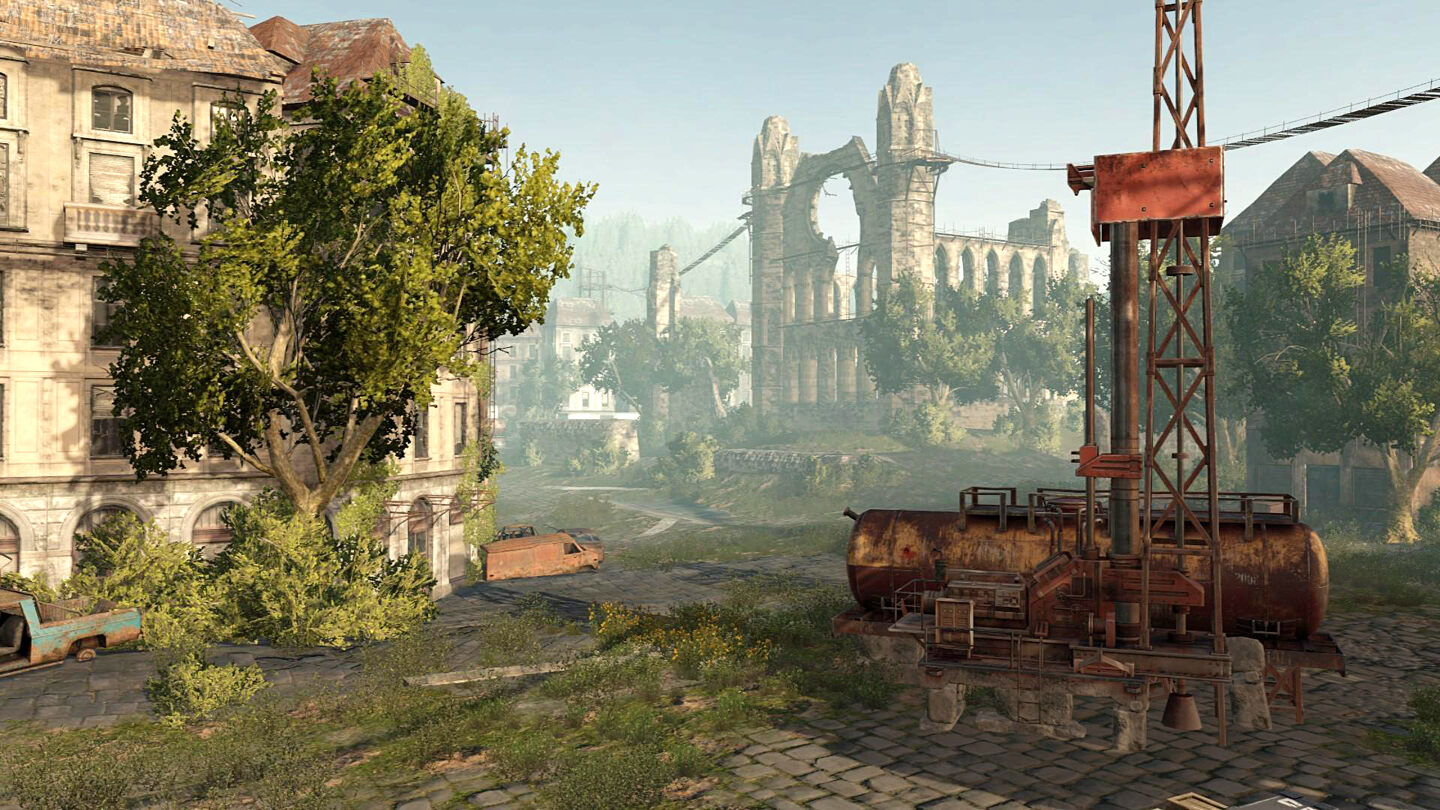 In the midst of all this, we are invited to survive by racing and gathering resources in our own armored car. And fighting, of course, too - both with drivers controlled by artificial intelligence, as well as with other players. Although you can also team up with the latter to complete missions in co-op.

In any case, in the process you will have to interact with the main factions that exist in the world of Crossout. What is extremely important - because these factions, especially at the initial stages, will help in development and pumping, give quests, provide equipment and resources.

As of today there are seven such factions - Mechanics, Mad Men, Wanderers, Scavengers, Firefighters, Steppenwolves and Children of the Dawn. And all of them, of course, differ from each other - not only in motives, appearance, and history, but also, and this is really important, in game features. For example, the Mad Men in armored car battles press by numbers and rely on close-quarters combat. Wanderers, on the other hand, have fast maneuvering vehicles, are able to release drones and become invisible for a while. Steppenwolves are the most disciplined warriors. And, for example, the Firewolves predictably grill enemies with flamethrowers and throw barrels of incendiary mixture from catapults - and the same equipment can be obtained by cooperating with them. And each faction, as they reach a certain level of reputation, will allocate a unique partner to help us. Some of them can be a psycho who immediately rushes head-on; some, on the contrary, prefer to fight fast and mid-range battles. Some of them are good at gunner and navigator duties. But the partner from the "Trashmen" has been sitting in the tank turret for too long, so now he can't hear or think well, but he's great with guns.. 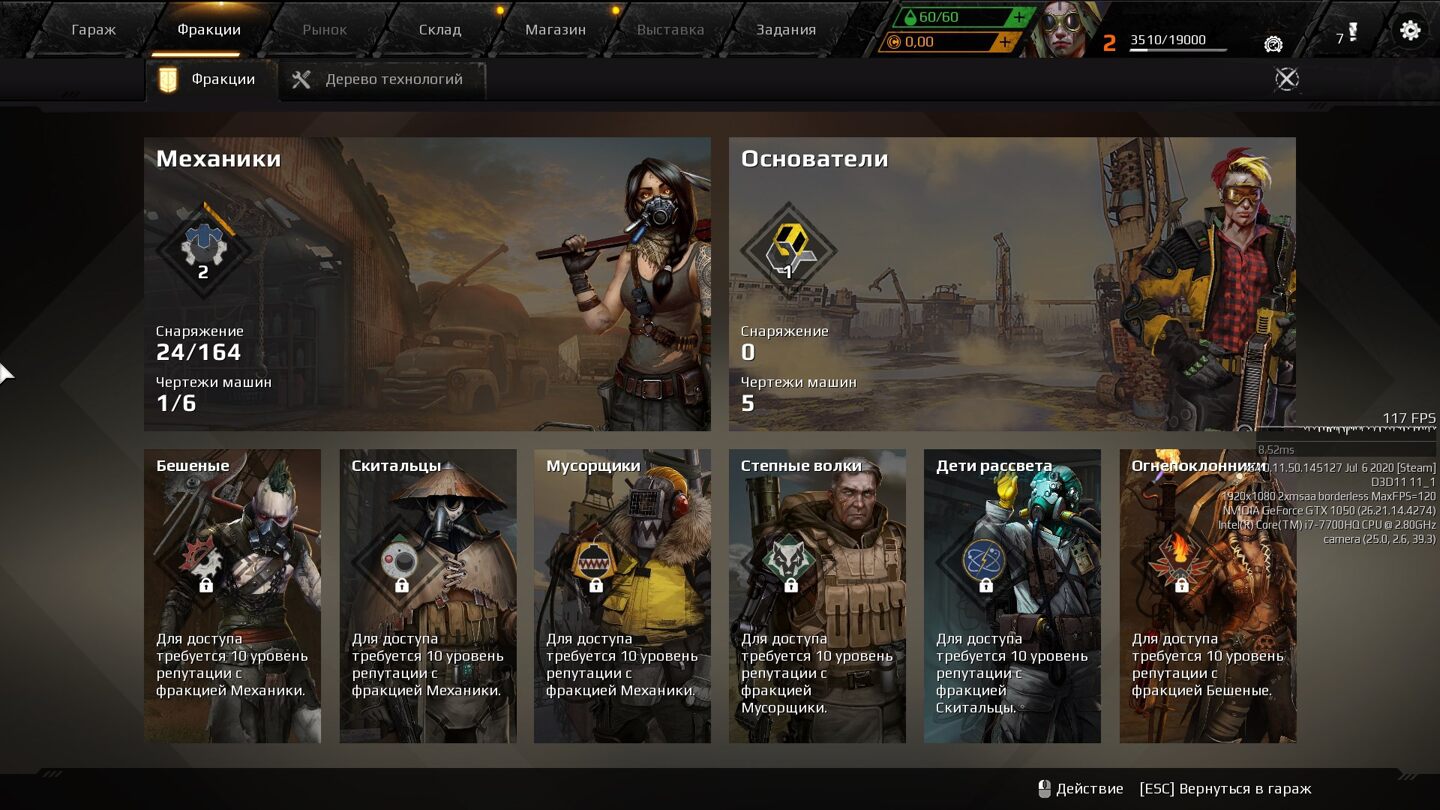 About the car builder

It is the equipment, as well as the vehicles on which it can be installed - the life and blood of Crossout. And the trick of the game is that, unlike, for example, in Worlds of Tanks, War Thunder and Worlds of Warships, here we create our own vehicles. Will it be a fast buggies, heavy all-terrain vehicles or even entire battle platforms on antigravity cushion - the freedom of creativity here is limited only by the imagination of the players.

"Deathmobiles" are created from parts and available parts, and you choose what shape your "swallow" will be, what armor to put on it, what guns and auxiliary systems and where to bolt - on the bumper, on the roof, on the hood and so on. There can be thousands of combinations. Weapons, too, is decent - it's ramming, and shotguns, and rocket launchers, and chainsaws with drills, and machine guns and much more. Plus it is very important to leave room for auxiliary devices, such as radar, or, say, a jack, with which you can return your jalopy to the road in case it overturns. 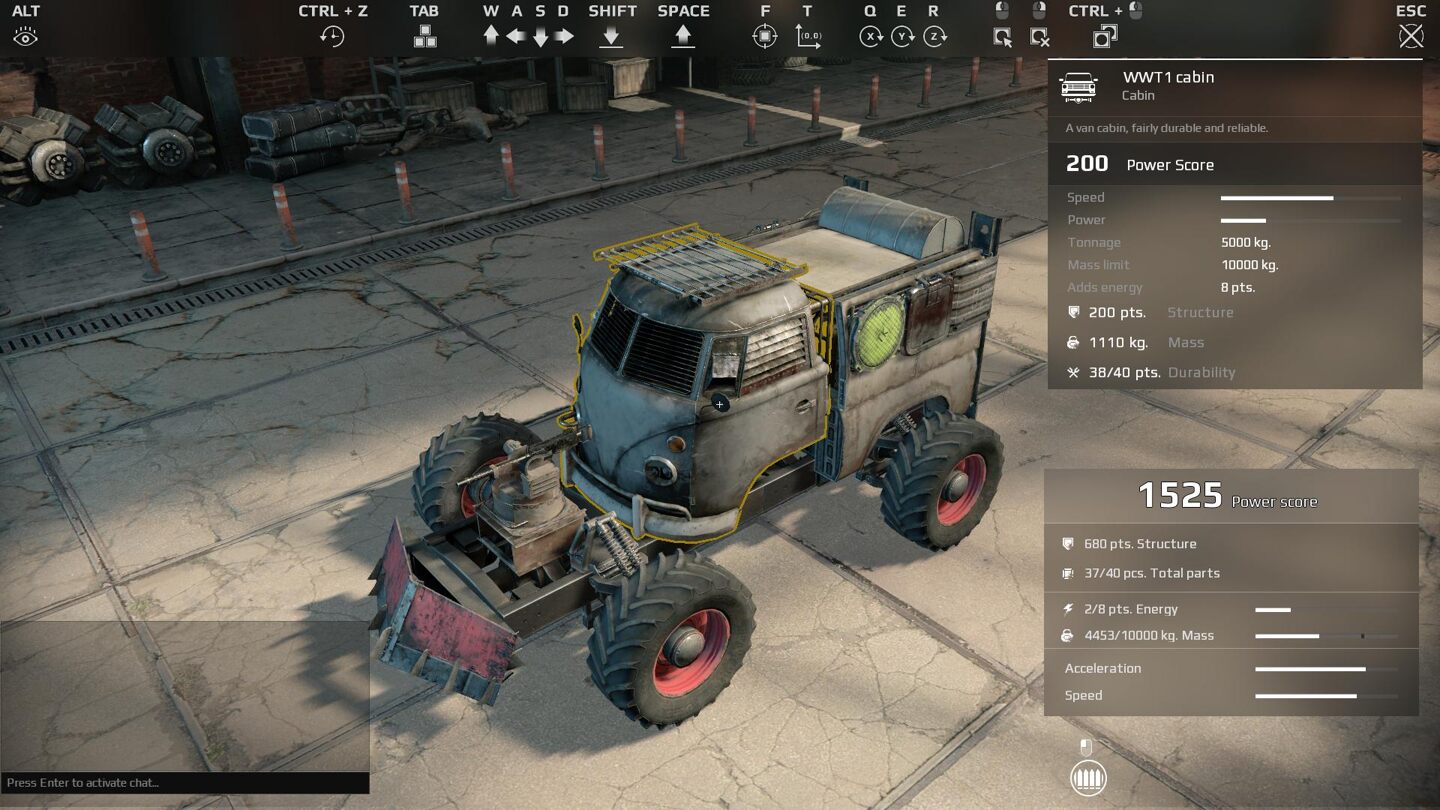 But at the same time it is necessary to create a car in your own workshop so that your miracle creature on wheels still drove - and at the same time by its performance characteristics was combat-ready. If the car is heavy, its engine must be powerful enough. It is also stupid to put all the cannons on one side or to ram it on the roof. Well, and you have to take into account the overall energy capacity of the car, its size and the number of places on the hull for this or that equipment. In general, all this is very similar to the creation of "mechs", i.e. walking robots in the MechWarrior games. And just like there, Crossout has a very detailed damage system: here you can sequentially destroy any machine into screws, shooting off its part by part, which is very important to use in combat.

In fact, in Crossout you are given the basic blueprints of armored vehicles and you are free to use them. But sooner or later these "default cars" will still have to be upgraded, something to add, disassemble, reassemble and experiment. If you, of course, want to succeed in battles with other players. 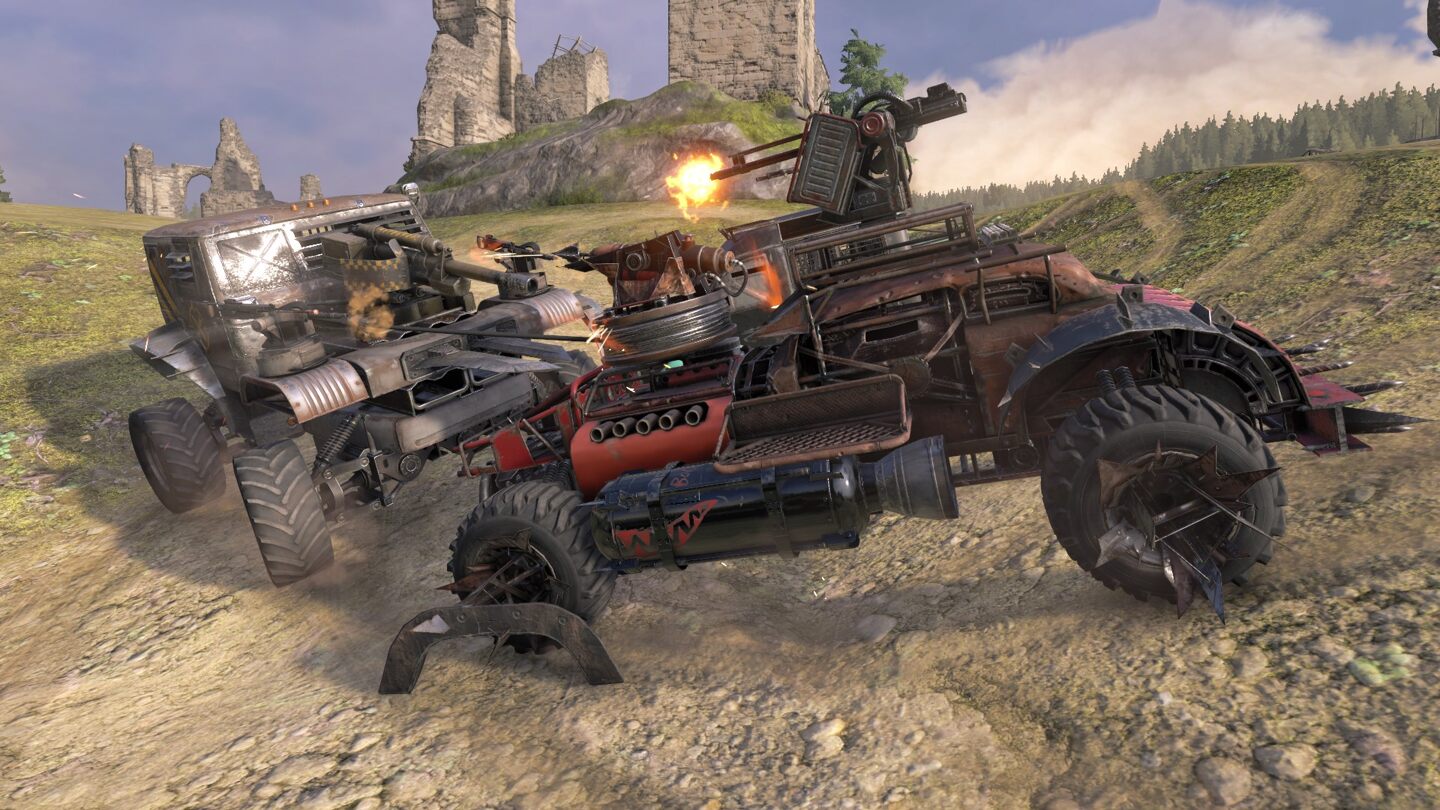 About the basic modes

As you have already understood, the main purpose of participation in the various modes of the game is just to hammer out, earn and find parts, more or less cool and rare parts and components to create and upgrade their cars.

We mainly do this in two key modes - missions and raids. In missions, players are divided into two teams of 8 and try to take over each other's bases. There is an option where you have to attack one single point on the entire map. And in "Control" you must capture and hold neutral fortifications. A variation of these missions are also "Scuffle", where you are allowed to fight on the same characteristics of armored vehicles, as well as instantly kill the enemy.

Raids, on the other hand, are a cooperative format, in which users in a small group consistently perform different tasks - there is an escort, pursuit, defense, assault, and even kidnapping. 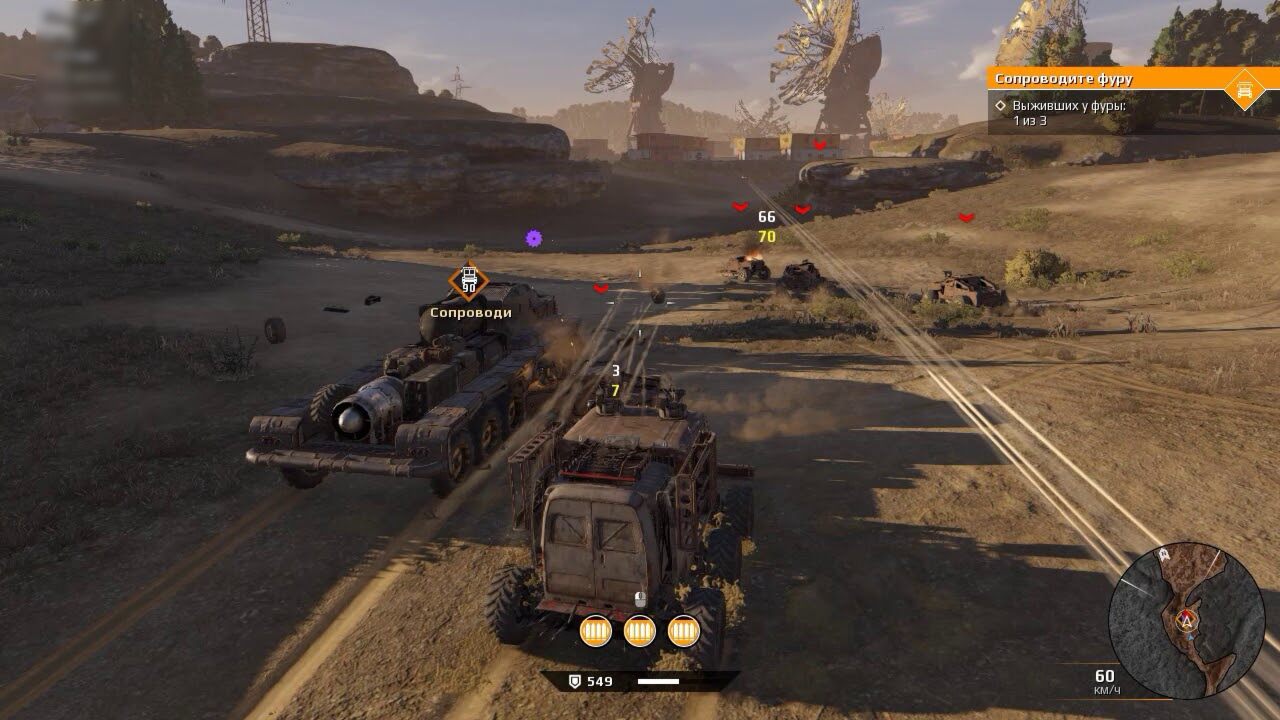 Players also fight each other in ranked and clan battles in a 4 on 4 format. Only in the first case you can act alone, and in the second, respectively, only as part of a permanent group of like-minded people. Clan wars are an important part of Crossout and are held regularly. Also associations of users participate in tournaments.

Many modes and missions, as it should be dedicated to certain dates, holidays and events. For example, during the "Snowstorm" players have to steal gifts and even Christmas itself - and participate in the Christmas fever, where the reward is... firecrackers. The names alone speak volumes - "Breath of Spring", "Where'd the Wheelbarrow Come From, Man?", "Follow the Rabbit", "Flea Market". All in all, you don't get bored.

Finally, unlike many other MMOs, Crossout has quite an interesting story campaign available in "Adventure" mode, which tells us that in the Wasteland people in whole settlements for some reason go crazy and start killing each other. And we play as one of the survivors of this nightmare, who is now poor (at first, of course) and does not remember anything, but really wants to understand the causes of the events and to recover his memory. In the process, we not only complete story missions, but also take on side missions (if you want), as well as participate with other players in various special events.

For all its versatility, the many different modes and the sophisticated armored vehicle constructor, this game is actually quite simple and easy to learn. At first, you will definitely be accompanied by computer-controlled allies, and the "Mechanics" faction, which meets newcomers at the start, is extremely friendly.

So Crossout sets up and disposes you to itself, inspiring you with a gameplay that is rich in features. Yes, then it will be much harder, you'll have to spend a lot of time on cranking out and finding the necessary cool parts for your "iron horse". Although this process can be accelerated by periodically investing a living ruble in the game, here the Crossout authors simply follow the laws of the genre, as well as all modern MMOs. But the ability to create your own invincible "asphalt roller of death" and drive through the Badlands, breathing the atmosphere of post-apocalyptic desert and rust with a taste of engine oil from "Mad Max" - it's worth it, you must agree.. 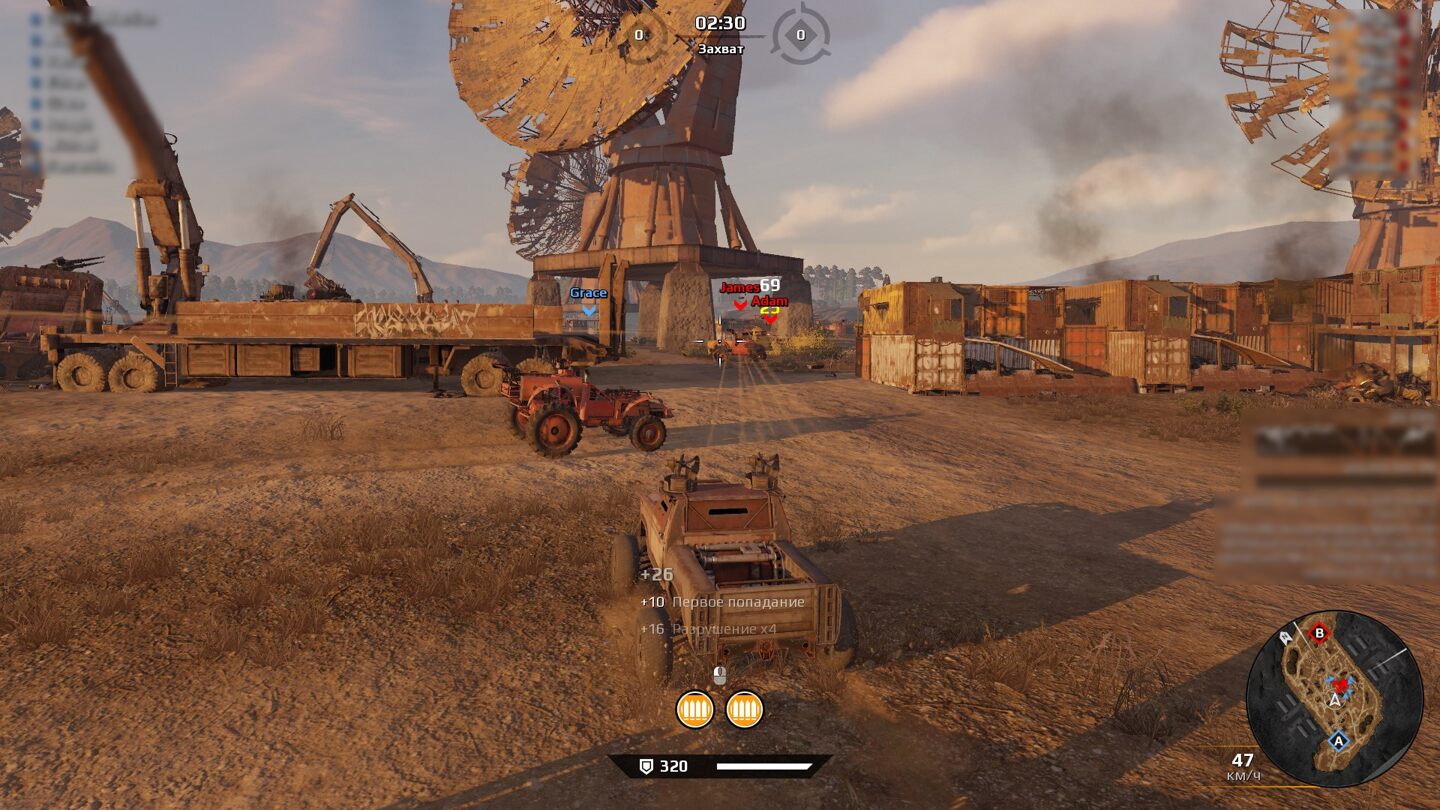 In addition, Crossout has interesting features apart from the car builder - for example, the in-game market that allows you to sell the improved parts you create in the workshop. So you can earn money to recoup your investment in the game, if there were any. Of course, no one here is not forced to do anything, want - buy or sell, want - do grind (ie knocking out resources and parts cooler) or just do the story tasks.

Exactly the right atmosphere, clear, but rich in features gameplay, unique vehicle constructor, an abundance of different modes, including even a story mode, actual support and the constant release of some events and updates - the reasons why Crossout is popular, are obvious. And if everything on this list suits you, urgently put on your masks and sunglasses, remember your driving skills and go to revive the Wasteland.