Most people around the world have grown quite fond of movies about Scandinavian mythology. And to such lovers of this mythology and atmosphere, video games offer a lot. You can forget about your daily life and for a time immersed in a fascinating fictional world, soaked in the sights and atmosphere of Scandinavian mythology. Game projects, published to date, in this genre came quite a large number. And each of them gives its own gaming experience and impression, which is impossible to describe in words.

One of the most popular and recently released game projects, released by French studio Ubisoft. The video game is fully imbued with Scandinavian mythology and will allow us to take on the role of a warrior, forever traveling through the unknown lands of England. In contrast to the interesting plot, which will introduce us to the universe of the game, as well as its characters. With whom the protagonist will meet from time to time in his travels. The game also offers us a large number of interesting gameplay mechanics. Thanks to them, we are able to fully experience the daily life of the Vikings, filled with the eternal raids and robberies. After all, the game is set during the Viking Age of Conquest in the year 873. We have to challenge the Anglo-Saxons and their kingdoms together with the main character and take over these lands. But for this, it would be worth enlisting the support of reliable allies. After all, you can not take the fortress alone. Video The game has a huge picturesque world, the graphics in the game performed at the highest level. Many interesting and picturesque views are present in the game, which is greatly facilitated by the beautiful graphical part of the game. From snow-white-covered mountains to fertile, forested areas. Real fans of Scandinavian mythology will also be something to see.

The protagonist will meet both people living in the settlements and the very real gods, who are not easy to see and know their goals. Settle on your own drakkar and lead your warriors on their next foray in this beautiful part of the Assassin's Creed series.Valhalla will give you an unforgettable experience and unforgettable gaming experience. The game can help you feel the Scandinavian atmosphere and the life of the people of those times. 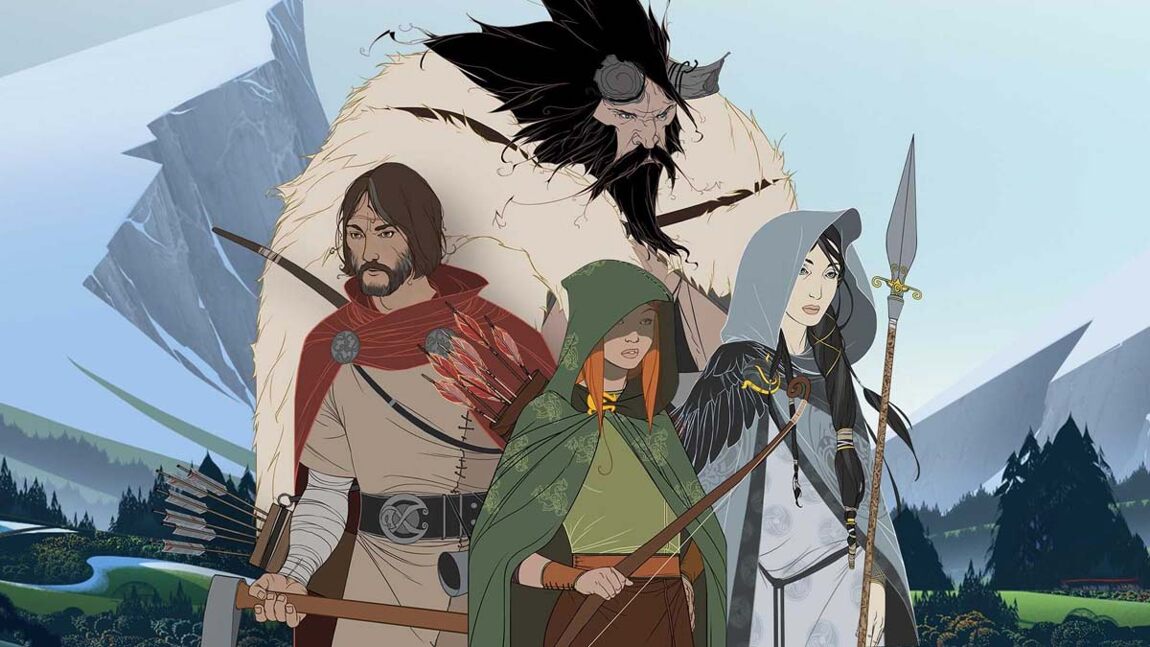 Released in 2014, the first part of the game from the studio Versus Evil, and immediately got its fans and popularity. After all, the game came out only thanks to donations on the platform Kickstarter, and of course the efforts of the developers. Though the game doesn't consist of Scandinavian mythology, but still it is based on it. Everything in The Banner Saga is imbued with this familiar atmosphere. Some are very fond of its dark and mysterious atmosphere, we were always curious to know what happens next and where our heroes will go in the end. Other players were attracted by its interesting turn-based battles. Each character in the game has its own story and character, not always everyone agrees with your decisions, but the situation requires to unite to survive. The world of the game itself is a bleak and harsh territory, consumed by endless winter and hopelessness.
A world where the gods have turned their backs on humans, you have to rely only on yourself and your friends. It was not enough trouble to these lands, and yet from out of nowhere come strange hostile creatures - the Dreadgees. And we, taking control of the protagonist, as well as giving orders to his squad will move through entire once-living settlements and plains. Survive in this unjust world, and learn the motives behind the aggression of the unknown invaders. The cold and the fear of death forces our heroes to move faster and competently manage the time we are given to make the necessary decisions for the group. 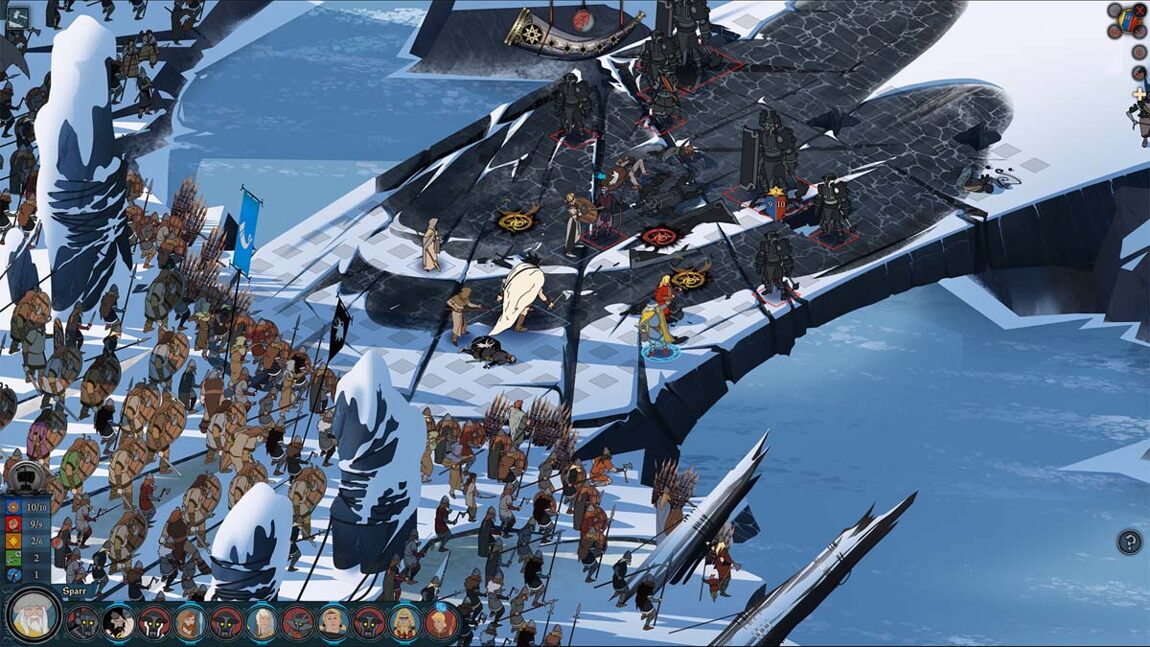 During our seemingly endless journey, we will encounter people who are hostile to us or friendly enough to help us with advice or even join us. You never know what we will encounter on the road. A huge variety of randomly generated events will not let you get bored. Not always our choice will be the right one, and not everyone will agree with it in one situation or another. A lot of conflicting decisions will be a real hindrance in this arduous journey. The graphic part of the game is made in an unforgettable and interesting visual style. Everything in this game will be long remembered and won't leave you indifferent. The gameplay is also quite captivating and will not once challenge you at high levels of difficulty. Although the role-playing system is well done and the game is enjoyable to play, it is first and foremost about the story, dialogues and interaction with the characters and of course about the hard choices and deprivations. The game will give you an interesting gaming experience and will not leave you indifferent, because everything in this game is imbued with Scandinavian mythology. 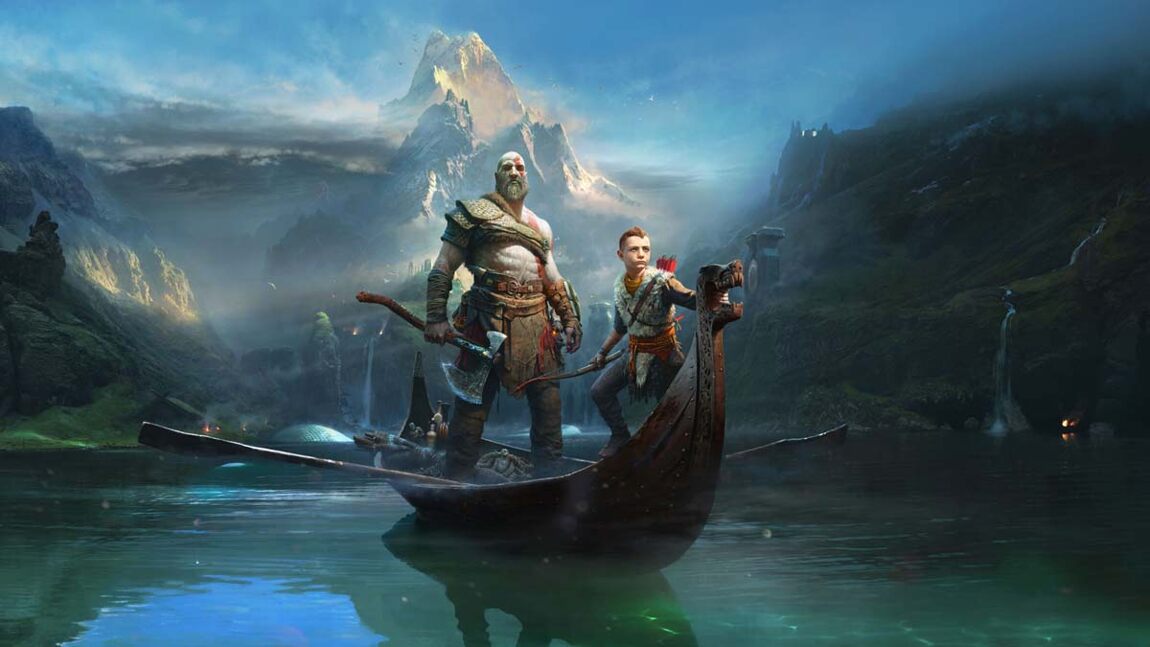 Another great representative of the game industry, fully imbued with the very Scandinavian mythology and attitude that most people love so much. The game came out in 2018 and immediately became popular, it was discussed everywhere and for quite a long time. Although in the previous parts of this rich franchise we saw representatives of the pantheon of ancient Greece. This time our protagonist Kratos and his son will have to face the Scandinavian gods. Unfriendly and unloving to outsiders gods that will always follow your trail. Every action you take will not go unnoticed. And every clash with this or that stranger can turn into a fierce fight. After all, Kratos is no mere mortal, and the gods know it. Ravens of Odin are always watching you. The game is fully dedicated to mythology, the main character will travel through the fabulous wooded places, enchanting with their beauty and severity to uninvited guests. Kratos and his son Atreus will stumble upon ancient Scandinavian writings, which contain a lot of useful information about the game's world. On the Lake of the Nine Worlds our heroes will meet the giant-sized World Serpent Jormungand. Kratos is no longer holding the Blades of Chaos, with which we went through the past parts from beginning to end. Now Kratos wields the Leviathan axe. If the first weapon smote enemies with flame, the axe is endowed with the magic of cold, which is quite in line with the northern lands. The combat system of the game has undergone changes and became more complex and interesting. Graphic part is made at a high level and will give you a lot of pleasure in the adventure, in which we really join the Scandinavian mythology.