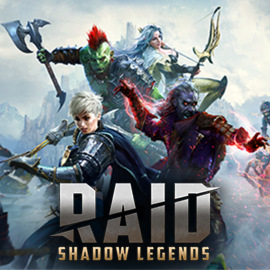 RAID: Shadow Legends is a free-to-play role-playing game with turn-based battles in a fairy-tale setting. In comparison with other MMORPGs it stands out with its unusual leveling system and hundreds of heroes that can be collected and upgraded as they perform a variety of tasks. In addition, here we are given time to think over the moves - there is no need to quickly click on any combinations. Let's find out what else is interesting about the project that is popular among millions of gamers around the world.

RAID: Shadow Legends takes place in the fantasy kingdom of Teleria - with elves, orcs, wizards and other attributes of the genre. But the plot starts not quite usual: four heroes go down into a dungeon for an artifact, they exchange jokes, brandish weapons, but suddenly they are killed by a fire-breathing dragon. Then a representative of the light forces, called the Arbiter here, offers to revive any of the four of your choice so that you can take him under your control and help him walk the path of vengeance. And there's a lot to avenge: the kingdom is tyrannized by the dark lord Cyrot - it's him you must eventually defeat by cleansing the fairyland of monsters and evil spells. 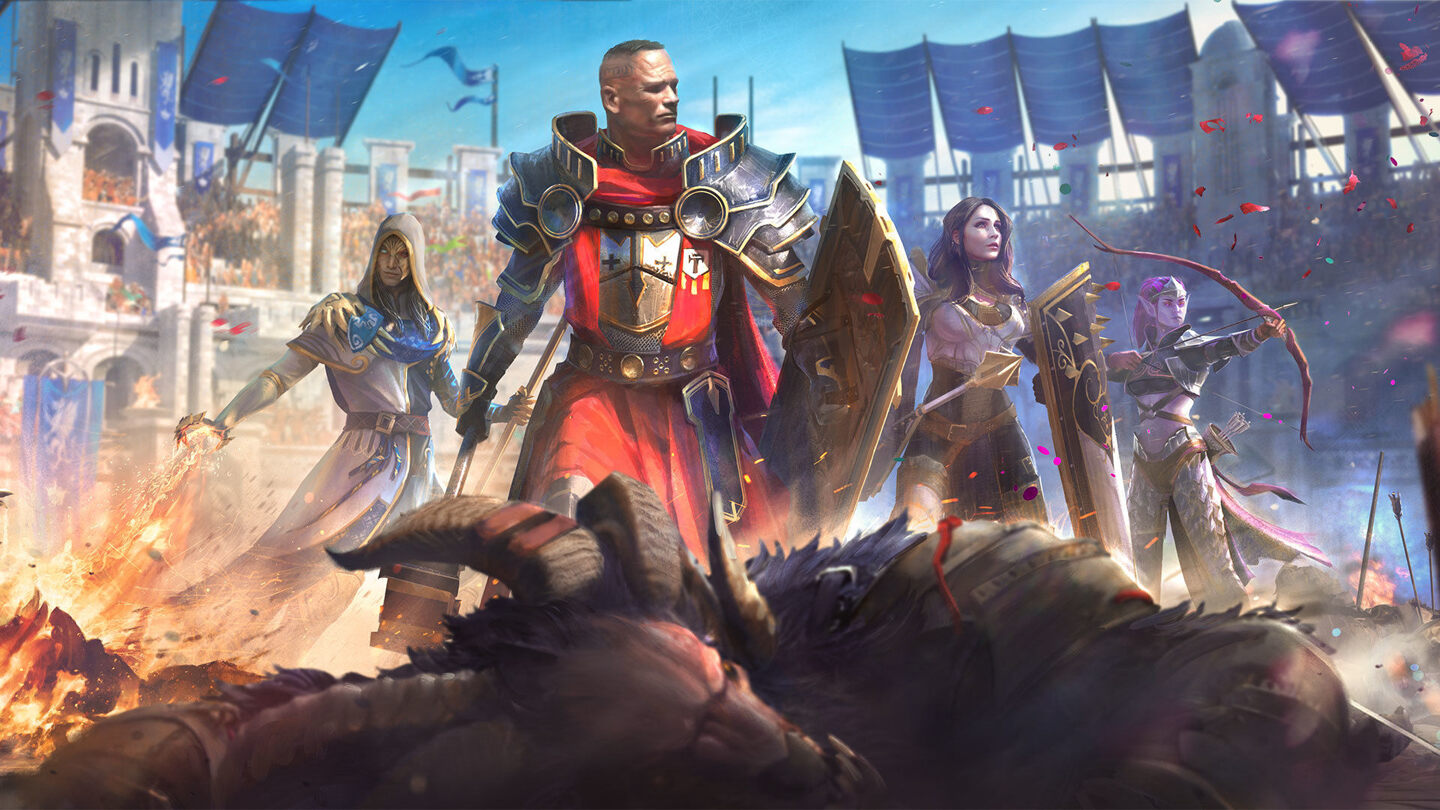 To achieve this goal the player is given a personal Bastion, a shelter where you can rest between missions, unlock and improve heroes, choose quests, and build buildings that give you something useful. Also the Bastion shows your reserves of energy, gold, silver and the most valuable currency - rubies. An important point, because every action consumes one or another resource. For example, to go down a dungeon, to pass the story chapter or raid on the clan boss need to spend energy points. And if you find, say, during a mission a shard with the soul of a new hero - you can release it and add it to the collection for silver.

As you complete the quests and story chapters, more and more characters are revealed. Their number in the game is huge - over 400, each allowed to pump up to level 60 and in addition to dress up in some exotic armor. It is clear that for the maximum improvement of all the heroes no resources are enough. So you have to choose who to form squads of two or four adventurers - it all depends on the type of task and mode. If you have to fight with live players in PvP, one quartet will be good, and other heroes will be good for the boss. The main thing here is the balance of skills within the team: someone heals and strengthens allies, someone strikes in the area, and someone hits one target hard. 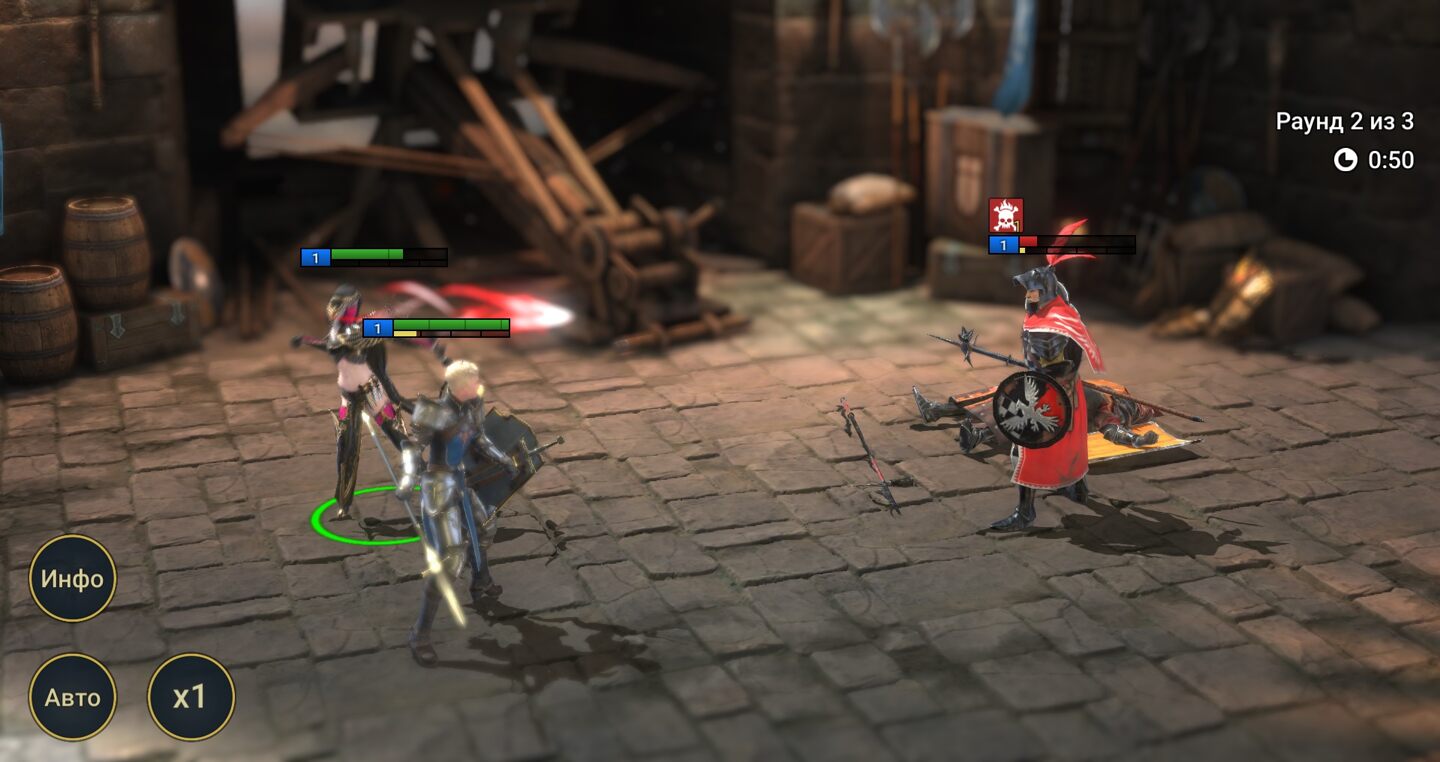 With an impressive range of combinations, the rules of RAID: Shadow Legends are simple and rather reminiscent of collectible card games. With the basics introduces a brief training under the guidance of the Arbiter, and to get to the rest it is not difficult to get by your own wits - just enough to estimate who and in what armor will be strong in this or that case. Sometimes it's the weakling healer who saves the day, not the wall-breaking bully. Or the hero, seemingly useless at first, suddenly "shoots" thanks to a unique skill - resistance to poisons, for example. Just as logically done battles, during which there is never a situation of "who's shouting over who". However, it's better to talk about this part of the game separately.

What are the battles in the game and how are they arranged?

The best way to understand the combat system is to go through the story campaign. It is single player and consists of 12 chapters with 7 levels each. The complexity of these stages gradually increases, the monsters become more evil, and the rewards for defeating them - more generous. In addition, before sending on a mission you can set the difficulty manually - the higher it is, the more resources and rare items the heroes will receive for their exploits. At the same time on the "hard" it is easier to understand the mistakes in the formation of the squad. If characters get to the main monster pretty beaten up or incomplete, it is worth to reassemble the team and challenge the forces of evil again.

There are no open locations, which now you almost meet in every MMORPG. In the same scenario mode levels are corridors through which the unit advances on their own, without guidance from the player. Once in the next room, heroes encounter enemies "wall to wall" - and after a series of such skirmishes go to the boss. Battles are staggered: first the enemy strikes, and then one of the user-controlled characters - this sequence repeats until victory or defeat. 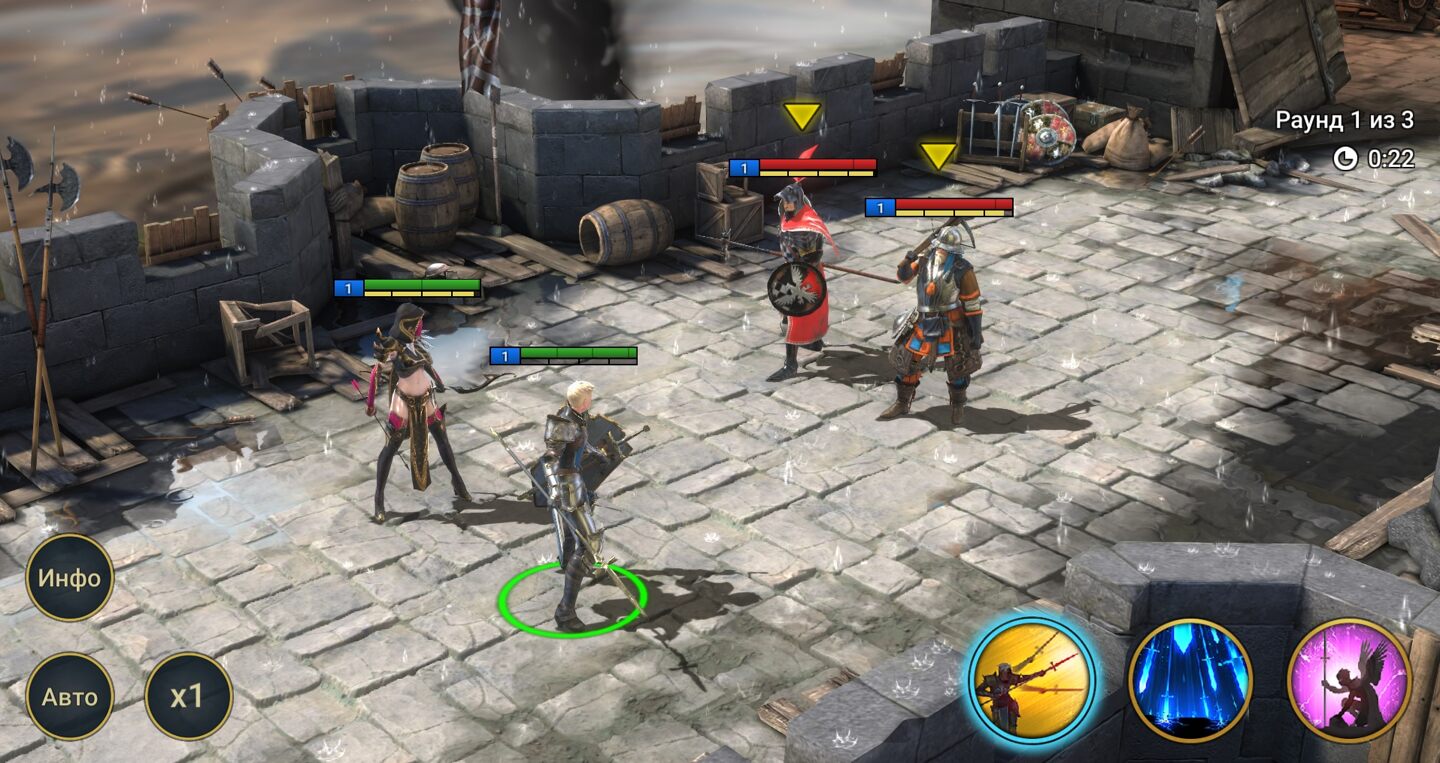 Another thing is what kind of blows to exchange. After all, in addition to normal attacks, characters have enhanced attacks, as well as skills like strengthening shields or health of comrades. The choice between the types of actions is simple, but important. Banged you, say, some sort of ultimative rain of arrows, and he reloads - and in the next room to show the mother of god to the enemy has nothing. In addition, each hero, as well as the evil monster, attacks and defends himself differently: some use the Force, some use Spirit, some use Magic. All three elements are balanced according to the "rock-paper-scissors" principle, which means that Power is usually inferior to Spirit, and the latter to Magic, but Magic is weaker than Power. There is also a golden mean - Darkness, which deprives the characters of their weaknesses, but does not give them any special advantages against the other elements.

Having gained a hand in the story campaign, you can go to one of the ten dungeons. There, too, is a crowd of rank-and-file enemies and a ringleader at the end, but there's a nuance - dungeons are needed to mine certain things. For example, forays into the Minotaur's Labyrinth bring scrolls to develop the heroes' talents, and the Dragon's Lair hides legendary equipment items. What's missing, we fight for. 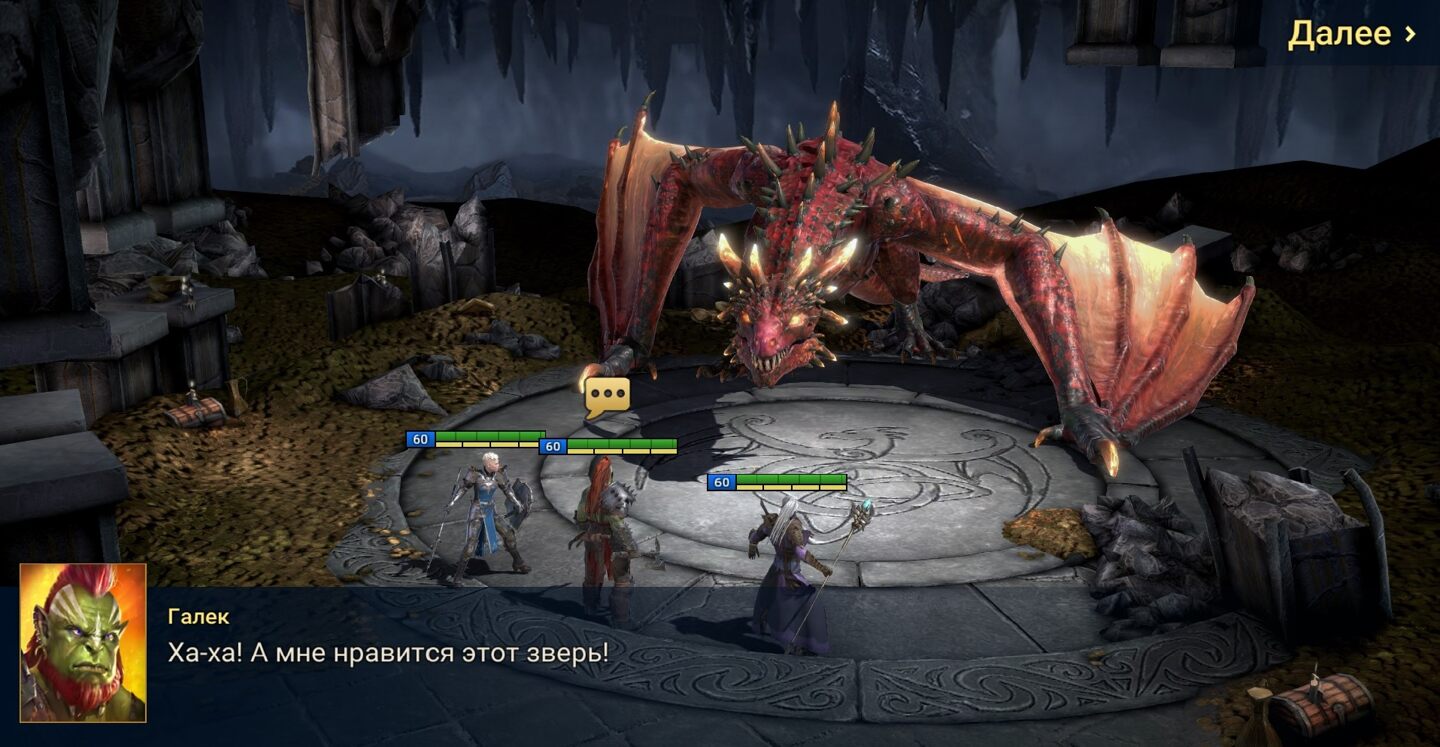 RAID: Shadow Legends features an "Arena" for PvP - two-player squad battles in four-on-four format, as well as raids on clan bosses. As you can easily guess, the difference between these monsters from the usual monsters is that they are available to clans - associations of users - and give more bonuses. Stand out are the "Factions Wars", where the players fight high-level. But newcomers have something to do: everyone is offered a daily, weekly and monthly tasks, a small chain of tasks in the "Tests" and hundreds of quests in the "Missions". And awards are given not only for completing and completing the above, but in general for activity, adding friends or the most common pumping characters.

It's hard to imagine the role-playing genre without character development, and Raid is no exception. Each of the more than 400 characters can be upgraded over time to level 60, or six "stars" (a warrior with less of them in some modes, like the same "Arena", no reason to try). They are divided into 5 classes of rarity, from normal to legendary, and 16 races - there are high and dark elves, undead, orcs, vampires, barbarians, and other withered brethren. Although in this case, the leveling could be very confusing, in fact, everything is simple again. Each character has three talent branches: attack, defense and support. At the same time, you can develop two of the three to get the kind of fighter you need for your style of play or for specific tasks in your team.

Like other similar games, here the level depends on the experience gained, and the latter is tied to the complexity of the quests - the harder they are, the higher the reward. But Shadow Legends has an interesting feature: to turn one hero into a killing machine, you need to feed him characters weaker - they are called "food" here. It looks something like this: you choose wards that are not particularly interesting to you, pump them in battles to level 30 or 40-th and sacrifice them to improve the desired warrior to six "stars". In order to succeed, they go to the gas pedals of experience - they can be bought for rubies. And those, in turn, are obtained as prizes in quests or purchased for real money.

In addition, armor and weapons are important. They are also a dime a dozen in the game - of varying rarity, properties, and colors. There are the whole sets, where separate parts (for example, gloves and boots) reinforce each other and, accordingly, the hero wearing them. There are a total of 34 such sets, and they are obtained in quests. Add the development of the base in the Bastion, where you can erect buildings - say, the Ruby Mine regularly brings valuable resources, and the Market sells for silver new heroes and items. In short, the development system in the game multifaceted, with its own features, but it is not called abstruse. And it is not difficult to do without monetary costs - after all, the donation is intended to accelerate the leveling, but not to replace it.

RAID: Shadow Legends is perfect for passing the time. Such entertainment is also called "time-killers" - you don't have to wiggle your brain, perform some complicated actions, go deep into the plot and read the manual in five volumes. But they allow you to have a fun hour or two at your leisure. The game's design is also noteworthy - although it was originally released for mobile platforms, it looks just as good as other representatives of the genre, it doesn't require an expensive PC and takes just 4 Gbytes on the disc. Beautiful, lightweight, logically arranged, without pretentiousness, pathos and gingerbread houses - a great option for the evening sitting at your computer or smartphone.